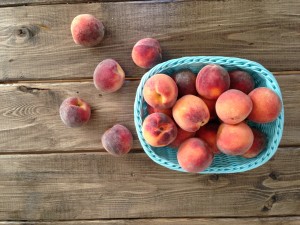 Growing up, my parents used to make huge batches of strawberry and peach jam each summer. I remember the kitchen being overtaken with fruit and jam jars, while my parents lovingly made delicious spreads to last the year. Yum! The other day, I found myself reminiscing about this and wondering why they stopped this yearly ritual. I had to assume that they had silently passed the baton over to me without letting me know. So I set off to make some jam that would make them proud!

Eagerly, I frolicked over to the supermarket and bought a pretty basket of local peaches. My husband has a theory that the cheaper the produce is, they yummier it is. He’s usually right (shhhh, don’t tell him I said that!) These peaches were cheap, so I took that as a good sign. I also stopped by a local European market to get some Gelfix because that’s what my parents always used (I had to make them proud, remember?)

Home I went and I got to work right away. Ok, fine, I got to work five days later, but I was busy, so don’t judge me. I decided to try a bourbon vanilla bean version. I’ll add vanilla bean to pretty much any sweet treat because I’m obsessed. As for the bourbon, I don’t usually like it, but peaches and bourbon just go hand in hand, so what the heck. Spoiler alert: it works so well in this recipe! 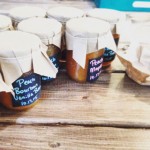