Where my husband and I live, there are a quite few restaurants that offer up a scrumptious baked brie skillet. Of course, each restaurant’s version is slightly different, but the one thing they all have in common is this: they’re delicious! Suffice it to say we’re both hooked on warm, melty brie concoctions.

The other day, we were grocery shopping and we came across some figs. The brie at sister restaurants Stonehouse and Lakehouse use figs in their recipes (if you’re in the Niagara region, I highly urge you to check out these restaurants). We also happened to have a brie round sitting in our fridge, just waiting to be enjoyed. We knew it was a sign: it was time to try making our own baked brie skillet. I don’t want to give too much away, but let’s just say that between the two of us, there wasn’t a single bite left once we were done with it. 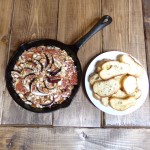 There are no related posts at this time.